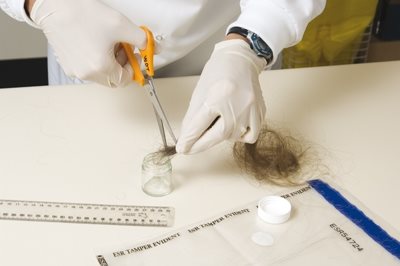 A study of 1383 drug users was undertaken in Brazil focusing on crack cocaine users. Detailed interviews were undertaken about their personal life history and psychoactive substance use and hair samples were taken to corroborate the interview data. The main objective of this paper is to evaluate hair drug testing as a biomarker capable of corroborating the interview data and history of drug use.

Head hair samples were collected from 333 known drug users, 298 males and 35 females, from various parts of Brazil, prior to their voluntary detoxification treatment. The samples were sent to ChromaTox for analysis. Head hair sections (N=327) measured from 0.5 to 4 cm. Body hair samples (N=6) were not sectioned and measured from 1.5 to 3 cm. The samples were extracted and analysed by LC-MS/MS using methods accredited to ISO/IEC 17025 standards. A cutoff of 0.5 ng/mg was used for cocaine and 0.2 ng/mg for AEME, cocaethylene, and norcocaine. The limit of quantitation (LOQ) was 0.1 ng/mg for all analytes (cocaine, benzoylecgonine, norcocaine, AEME, crack cocaine).

The results of the analysis of hair samples confirmed the usefulness of the detection of drugs in hair to assess drug consumption over a long period of time, and in this case to corroborate interview data. Samples where use of cocaine was not detected correlated with individuals who declared at their interviews that they had stopped using crack cocaine prior to the period covered by the sample. The results also showed no correlation between the declared amounts used of crack cocaine and/or of cocaine with the levels detected in hair. This is expected, since, whilst the hair results can be compared with the results previously analysed by the laboratory, it is well established that there are many factors that affect levels of drugs in hair and therefore it is not possible to infer from the levels detected in hair the amount of drug used. These factors are for example, inter-individual differences in metabolism, hair types and cosmetic treatments. Hair drug testing is an excellent tool for showing whether people used drugs or not over a long period of time. It is not possible therefore to establish the amount of drug used from the levels detected in hair. It is possible, however to compare the results with the results previously analysed by the laboratory and to use the levels of drugs in hair as a guide to the changes in pattern of use over time in the same individual.