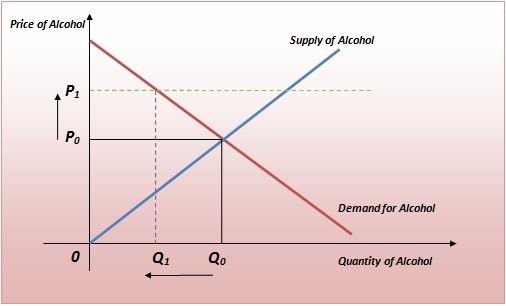 Setting a minimum alcohol price of 50p per unit could save Wales nearly £900m over 20 years by cutting crime and illness, a report has claimed. It could prevent more than 50 alcohol-related deaths a year, with poorer people seeing most health improvements. Researchers from Sheffield University say a 50p unit price could reduce total alcohol consumption in Wales by 4%. Health Minister Mark Drakeford welcomed the report as the Welsh government plans a new law on the issue for 2015.”
• Explore the concept of a price floor in the context of this example. Use a correctly labelled diagram.

• Include in your essay, a discussion of price controls and the effects of a minimum alcohol price on Welsh consumers and producers in the short and long runs.

• Also include a discussion of ONE alternative alcohol control strategy that the Welsh government could use?

The drinks are considered to be an act of geniality which has always been a served in special occasions like weddings, parties etc. Over the last few decades the sale of the alcohol had increased which resulted in high illness and mortality rates. There are around 40,000 cases where people are admitted to the hospital for alcohol related illness and the maximum number of deaths is considered to occur due to the liver failure. The social security is getting hampered because of alcoholism which is a burgeoning issue in the recent times. In order to weaken the practice of excessive alcohol consumption, the government of Wales has taken a step by increasing the price of alcohol by setting a minimum price of 50p per unit. The government aims at reducing not only the alcohol consumption but other objectives will also be achieved by this law. This initiative by the government of Wales will help to reduce more than 50 deaths related to alcoholism per year, reduce the crime rates which is anticipated to fall by 3,700 per year and the economy is expected to save around £882m for the next 20 years. All this will be beneficial for the society as a whole but the sellers of alcohol are worried about the sales and profits of their business. (Henderson, 2002)

For the understanding the mechanism of the setting the minimum price of the alcohol and its influence on the quantity of the alcohol, it is required for us to get acquainted with the basic fundamentals of economics.

The minimum price set in this case is 50p per unit of alcohol. This means that the government has exercised price control which is typically a price floor. The price floor is a situation where the price of a product is set above the equilibrium price and there is no permission for it to fall. when the price of a good rises keeping other factors like the price of the substitute or complement good, income and even tastes and preference constant then the demand for that good decreases. In this case, the government has set the price high in the form of a minimum price in order to reduce to the rates of crime and disease related to alcoholism in the country. The policy would reduce the demand for alcohol consumption. (Krugman and Wells, 2005)

As from the diagram we see that as the minimum price of P1 is set above the equilibrium price P0 then the equilibrium quantity decreased from Q0 to Q1. This will create a surplus for the seller which is a thing to worry. Since the alcohol is not considered to be a necessary good and the existence of substitute goods like soft drinks causes a bigger change in the demand due to a small change in the price. This is why the demand curve for the alcohol is elastic which measures the responsiveness of demand with respect to the change in price. (Chick, Gill and Black, 2010)

Price control in the short run and long run:

As the price has increased, rational consumer would lower its demand for alcohol and switch to healthier and cheaper option.  The implementation of a price floor in the alcohol market causes a deadweight loss to occur. A deadweight loss occurs whenever there is a gap between the price that the buyer is willing to pay and what he actually pays. It can also be defined as the loss in consumer and producer surplus. (Mankiw, 2004) 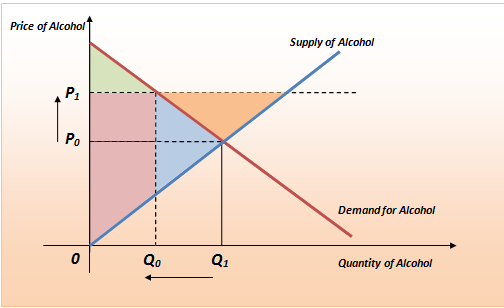 From the diagram we can infer that as the price rose due to the implementation of the price floor by setting a minimum price of P1 by the government the demand for alcohol has reduced from Q0 to Q1. But this fall is not the only fall. as the price increased, the consumer surplus got reduced. The new consumer surplus area is shaded green in the diagram. With the increase in the price the producer increased and depicted by the pink shaded area. The overall deadweight loss is indicated by the blue shaded area. Because of the price floor, the price increased which lowered the demand resulting in a imbalance in the demand and supply. Thus the sellers experienced a surplus of alcohol which is denoted by t he orange shaded a region. (Pindyck and Rubinfeld, 2005)

In the short run, the impact of price floor on the supply curve would not be felt. The price floor will cause the quantity supplied to rise which causes a surplus of alcohol and aggravates the deadweight loss.

But in the long run, market entrants will be influenced by the price floor and will enter the perfectively competitive market. This will cause a increase in the supply which will shift the supply curve of the alcohol to the left. This is because the sellers will be able to sell alcohol at a price which is well above their average cost and this will help the sellers who will earn economic profit. As the fall in the price is not possible as it is regulated by the government, the economic profits will ever converge to its normal level. This will induce new entrants to come into the market and create huge surpluses. Thus, in the long run, government will not be able to maintain the price floor. (POLICY OPTIONS FOR ALCOHOL PRICE REGULATION: RESPONSE TO THE COMMENTARIES, 2010)

It is possible for the producers to benefit from this situation if their supply curve is elastic and provided that they do not incur losses. For the consumers, they will also suffer loss as they have pay higher price. But the rise in the price or the implementation of price floor may not always cause the consumption of alcohol to fall. The extents to which the alcohol prices impact the consumers depend on the consumer behavior. The elasticity of the demand curve reflects how the change in price will affect the changes in demand.  This is the reason why some demand curves are described as elastic and some as inelastic. For the young adults, the rise in the price will make them to reduce the number of alcoholic drinks. But consider a heavy drinker; a rise in the price may not have any influence on the demand for the alcohol. At high prices they will still continue to purchase alcohol as they are somewhat addicted to it. (Byrnes et al., 2012)

Income elasticity also has some influence on the consumption of different types of alcohol. A study has revealed that with beer is income inelastic and that wine and liquor are income elastic. This can be explained by the nature of the products. Beer can be considered as normal good but wine and liquor can be regarded as luxurious goods.

The government of Wales can initiate alternative alcohol strategy to reduce its consumption in the society. The aim of the government should be to reduce the availability of alcohol in the market; this can be done by increasing the duty on alcohol so that the alcohol sellers will find no incentive to sell the alcohol at high prices because at high prices of alcohol the demand for alcohol will fall. (Approaches to Reducing Consumption of Alcohol by Youth, 2003)

The government of Wales had implemented price floor with a view to sustain overall welfare for the country. This policy is anticipated to reduce deaths per year up to 53, the health of the poorer people will improve, the absent from workplace will get reduced by 10,000 days each year and the economy will tend to save more. (BBC News, 2014)

The unwanted surpluses in the alcohol market causes inefficiencies like resources get wasted, illegal selling of alcohol at the price below the price floor and inefficient allocation of the volume of sales among the producers. If alcohol is sold at price lower than the price floor then there will be a parallel black market of alcohol which is illegal and detrimental to the society. Another problem is that alcohol will be smuggled into the country and likewise people will look ways to buy alcohol drinks at cheap rates. The illegal sellers of alcohol will yield profits from such transaction and will engage in illegal shipment and avoid tax. (de Visser et al., 2014) Thus the government must take other alternative alcohol control strategies. Another possible strategy that can be taken by the Welsh government is banning the advertising of alcohol as this would influence the underage youngsters. The Welsh government should also try to change and alter the behavior of the people at the local level and encourage people to consume other healthy drinks. (The Government’s Alcohol Strategy, 2015)