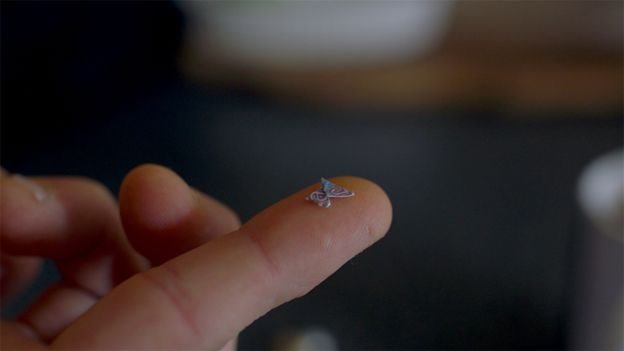 There is a small community of people in the UK who “microdose” – or take small amounts of psychedelic drugs as part of their daily lives. They say it boosts creativity and can have medicinal benefits, despite a lack of scientific research.

On a table in his house in Durham, Simpa shows me a tab of LSD he has cut into about 10 pieces.

The whole thing would be enough for a trip he says, but today he’s taking just a tiny dose of it.

On the days he does this, Simpa says it’s just part of his morning routine.

“I take it with a cup of tea, my toast and my vitamins,” he tells the BBC’s Victoria Derbyshire programme.

In another part of the UK, “Dylan” – whose name we have changed – is going through a similar ritual with some magic mushrooms, weighing out a tiny dose and eating it with his cup of tea.

Some people use microdosing simply to “improve their day”, others to enhance their creativity and some use it in a therapeutic manner – arguing it helps with their mental health problems.

Both LSD and magic mushrooms, the drugs most commonly used to microdose, are illegal Class A drugs carrying a maximum sentence of seven years in prison for possession.

A small number of people we spoke to had tried it with MDMA, also a Class A drug.

Dylan says the law is not much of a deterrent for him. He argues he is “not hurting anyone or creating a trail of devastation by doing this”.

He has a very ordinary, respectable job. The fact that he goes to work having taken illegal drugs is not something his colleagues know, although his friends do.

He says the microdoses make him better at his job; more able to concentrate.

“It just gives you that very kind of calm and relaxed sense of being centred,” he says.

Simpa is one of the people using microdosing for therapeutic purposes.

At 28, he is living with quite severe mental health problems – “depression and anxiety as a result of childhood trauma, that led to borderline personality disorder and PTSD”.

He says the prescription medication he has been given results in more side-effects than benefits.

“I’ve found that these substances, psychedelics, give me the benefits without any of those drawbacks. Me using these substances means I’ve been able to view my trauma so that it’s just an experience, a memory like any other.”

Such individual experiences are, of course, anecdotal. There is no scientific proof behind claims of the medicinal benefits of microdosing.

James Rucker, a psychiatrist, is one of a number of people carrying out scientific experiments into the potential medical applications of psychedelic drugs.

He was recently involved in a trial at Imperial College London looking at the use of magic mushrooms in clinical depression. It did not, however, look at microdosing

“Microdosing at a medical level, we know absolutely nothing about,” he explains.

“The only way that we can sort out whether or not it works is by doing a blinded, placebo-controlled randomised trial.”

He says the dangers of people self-medicating like this are currently completely unknown, and that is where the problem lies.

“The definition of a microdose is that you don’t notice the subjective effect, but that doesn’t mean it’s not having any effect on you‬.

“We don’t know what the risks in the long term might be.

“There was some concern before 1970 – when the drugs were being used clinically – that in people who were liable to develop schizophrenia and psychotic disorders, the drugs might actually uncover those problems in some people.

Those who microdose, however, argue its benefits go beyond alleviating mental health issues.

In Silicon Valley in the US, home to thousands of start-up businesses and some of the world’s largest technology companies, some entrepreneurs have claimed it makes them more creative.

Dr James Fadiman, who has been researching psychedelics since the 1960s, runs a website on microdosing where he asks people to report back to him about their experiences.

He says more than 900 people have responded so far.

“Anna”, who lives in the UK, says she has tried microdosing in the past, both with LSD and more recently with magic mushrooms picked from the hills near where she lives with her two children.

She says the experience wasn’t very dramatic, but on the days she microdosed she felt more productive.

“It’s just like having a slightly better quality of life.

“I would have quite an ordinary day – I just felt quite happy, calm and grounded and I would sleep better.”

There is, however, a further danger to microdosing – the risk of taking too much.

Psychedelics are very powerful drugs and Dylan admitted accidentally tripping at work when he took too big a microdose.

James Rucker says he knows he cannot stop people using drugs recreationally. “That’s something we have to work with,” he says.

He argues it is all the more reason to conduct research into the effects of these drugs.

Watch the Victoria Derbyshire programme on weekdays between 09:00 and 11:00 on BBC Two and the BBC News channel.