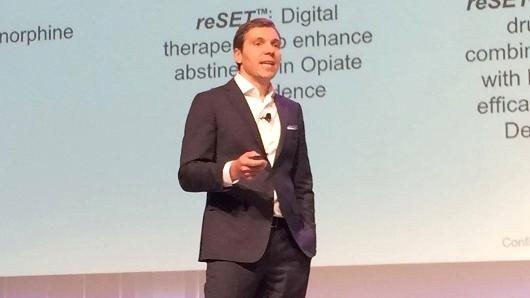 The app, developed by a start-up called Pear Therapeutics, is designed to be prescribed by clinician and used alongside counseling.

Pear’s technology digitizes a form of talk therapy called cognitive behavioral therapy, or CBT, which focuses on “examining the relationships between thoughts, feelings and behaviors, according to the National Alliance on Mental Illness.

Studies have found that CBT is an effective treatment for substance use disorders, and recent research suggests that it can be administered online via a desktop or mobile app. Abuse of tobacco, alcohol and illicit drugs costs more than $740 billion annually in the U.S. alone. Drug-related deaths have tripled since 2000, according to the National Institute on Drug Abuse.

Pear Therapeutics is part of a burgeoning category of health start-ups known as digital therapeutics. The idea is that software can improve a person’s health, without the same cost and side effects of medical treatment.

“This is the moment for digital therapeutics,” said Corey McCann, the founder and CEO of Pear Therapeutics.

In some cases, these apps are designed to replace drug therapies. Others aim to augment them by improving the likelihood that patients will take their meds.

As part of the approval process, which McCann said took several years, the FDA also created a new classification for digital therapeutics that are deemed low to moderate risk. That will likely make it easier for other apps to follow suit. Currently, digital therapeutics are being developed to help treat insomnia, opioid dependence, chronic disease and more.

The FDA gave the app, known as reset, a green-light after reviewing the results from a 12-week clinical trial. Almost 400 people participated and received standard treatment or standard treatment with the desktop-based version of the Reset app. The results found a “statistically significant increase” in adherence to abstinence from alcohol, cocaine, marijuana and stimulants, according to the FDA.Pear’s app has not been approved to treat opioid dependence, but McCann said the company has developed a version of the software that is currently under submission. It’s designed to be used alongside opioid replacement therapies.Pear recently raised $20 million in venture financing from a slew of investors including life sciences firm 5AM Ventures and JAZZ Venture Partners.