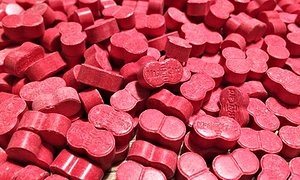 Drugs harm reduction campaigners are warning about high-strength ecstasy pills on the market in Britain after an analysis of drugs at a Manchester festival found some that contained double or even triple doses.

Fiona Measham, a member of the government’s Advisory Council on the Misuse of Drugs (ACMD) and founder of The Loop, a charity which tests drugs found or handed in at festivals, said she and her colleagues found ecstasy pills at the Parklife festival containing as much as 250mg of MDMA, the active ingredient. That makes them significantly stronger than the pills available during ecstasy’s previous hey-day in the late 90s, when average pills contained about 100mg of MDMA.

After a string of recent deaths attributed to MDMA poisoning, particularly among young women, she is calling on clubbers in the north-west to beware of red Mastercard and yellow Mickey Mouse pills, which were found to contain doses that could prove harmful or even lethal to some users.

There are particular concerns that irregularly shaped tablets, often with no score lines to easily split them, are confounding harm reduction advice that tells users to test their reaction to a half or even a quarter of a pill rather than swallowing the whole thing.

The annual Parklife festival, which took place last weekend in Heaton Park, Manchester, attracted 75,000 mainly young people for two days of dancing to acts including the Chemical Brothers, Ice Cube and DJ EZ. Measham, who is professor of criminology at Durham University, and her team set up a mobile laboratory to test about 300 samples of pills and powders either handed in at their own welfare tent or seized by paramedics, police and security.

Her team checked the samples using a laser spectrometer sensitive enough to identify the molecules in them, while rough estimates of the strength of pills were established by washing out fillers and adulterants with solvents and then weighing the MDMA left behind. “It’s not as accurate as if you were going to take it to a lab, but what we can do is give rough estimates on site of what are low, medium and high strength pills,” Measham said.

Parklife organisers issued site-wide warnings over red Mastercard pills after samples tested by The Loop weighed in at about 250mg of MDMA. There was concern over similar pills after the death of 17-year-old Faye Allen, who is believed to have taken one, at a dance music event in Manchester in May.

A second batch which came out at more than 200mg in strength were yellow Mickey Mouse pills. Three other batches – orange Warner Bros, blue Instagrams and grey Darth Vaders – weighed in at more than 150mg. 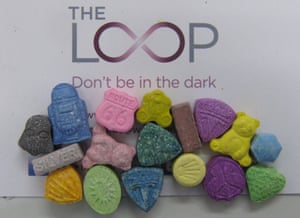 A selection of ecstasy pills seized or handed in at Parklife festival and tested by drugs harm reduction charity The Loop. Photograph: Fiona Measham/The Loop

After a dip in popularity, ecstasy use has been soaring in Britain and across Europe in recent years, as clandestine chemists respond to competition from legal highs and a new, consumer-led market dynamic on the dark net with an arms race over who can produce the strongest pills.

The surge in strength has spurred Dr Adam Winstock, senior lecturer in addictions at King’s College and founder of the Global Drugs Survey, to warn that 2016 might be the most dangerous year to begin taking ecstasy in a generation.

“[O]dd as it might seem better quality drugs are not necessarily safer for users (especially if you don’t know what you’re taking),” he wrote in a survey report (pdf) published this week. “Higher dose preparations and high purity powders can make it more difficult to dose safely and it can be easy to take too much.”

But Harry Sumnall, professor in substance use at Liverpool John Moores University’s Centre for Public Health, who also sits on the ACMD, said the picture was more complicated, and that historical MDMA human administration studies had dosed participants with 125-200mg with few adverse effects. Cases where people had died after taking ecstasy were often the result of unpredictable and idiosyncratic reactions to the drug that were unrelated to dose.

“The tricky thing, which complicates discussion about dosing, is [the question of] how do individuals respond to those doses. That’s where the big uncertainties about the market is. And that’s really why sensible harm reduction advice is to think about the dose that you are going to take and then halve it.”

Measham and her team from The Loop will be attending festivals across England this summer to test drugs. At the moment they are the only civilian organisation testing drugs for health and safety at music events. Measham called for similar work at all festivals and events.

She said: “The reason we test on site is so we can say with some certainty what is circulating on site at Parklife. It could be totally different contents of pills next week or the week after using the same press. That’s why you need to have testing at every event.”