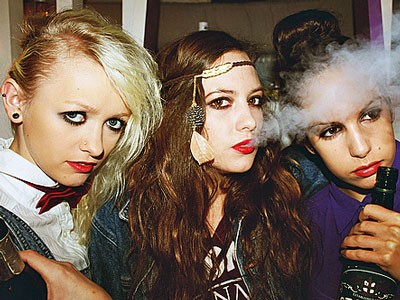 Sarah Boseley, The Guardian
Natalia Antonova
Adolescents who are regular users of cannabis are at risk of permanent damage to their intelligence, attention span and memory, according to the results of research covering nearly four decades.
The long-term study which followed a group of over 1,000 people from birth to the age of 38 has produced the first convincing evidence, say scientists, that cannabis has a different and more damaging effect on young brains than on those of adults.
Around 5% of the group used cannabis at least once a week in adolescence or were considered dependent on it.

Between the age of 13 and 38, when all members of the group were given a range of psychological tests, the IQ of those who had been habitual cannabis users in their youth had dropped by eight points on average.
Giving up cannabis made little difference – what mattered was the age at which young people began to use it. Those who started after the age of 18 did not have the same IQ decline.
“This work took an amazing scientific effort,” said Professor Terrie Moffitt of King’s College London’s Institute of Psychiatry, one of the authors.
“We followed almost 1,000 participants, we tested their mental abilities as kids before they ever tried cannabis, and we tested them again 25 years later after some participants became chronic users.
“Participants were frank about their substance abuse habits because they trust our confidentiality guarantee, and 96% of the original participants stuck with the study from 1972 to today.
“It’s such a special study that I’m fairly confident that cannabis is safe for over-18 brains, but risky for under-18 brains.”
The research, on people in Dunedin, New Zealand, was carried out by researchers from King’s College and Duke University, North Carolina in the United States and published online by PNAS (Proceedings of the National Academy of Sciences).
“Marijuana is not harmless, particularly for adolescents,” said Madeline Meier from Duke, one of the researchers. While eight IQ points on a scale where the mean is 100 may not sound a lot, she said, a drop from 100 to 92 represents a move from the 50th to the 29th percentile. Higher IQs correlate with higher education and income, better health and a longer life.
“Somebody who loses eight IQ points as an adolescent may be disadvantaged compared to their same-age peers for years to come,” Meier said. The study took into account the education of the participants, which can be disrupted by drug use.
The authors say that young people tend today to think that cannabis is harmless. “Increasing efforts should be directed toward delaying the onset of cannabis use by young people, particularly given the recent trend of younger ages of cannabis-use initiation in the United States and evidence that fewer adolescents believe that cannabis use is associated with serious risk,” says the paper.
“The simple message is that substance use is not healthy for kids,” said Avshalom Caspi, of Duke and King’s, one of the leaders of the study. “That’s true for tobacco, alcohol, and apparently for cannabis.”
Robin Murray, professor of psychiatric research at King’s, who was not involved in the study, said the paper was impressive and if the same results were found in other research, public education campaigns should be launched to warn of the dangers of cannabis to younger people. “The Dunedin sample is probably the most intensively studied cohort in the world and therefore the data is very good. The researchers, who I know well, are among the best epidemiologists in the world. Therefore, although one should never be convinced by a single study, I take the findings very seriously.
“There are a lot of clinical and educational anecdotal reports that cannabis users tend to be less successful in their educational achievement, marriages and occupations. It is of course part of folklore among young people that some heavy users of cannabis seem to gradually lose their abilities and end up achieving much less than one would have anticipated. This study provides one explanation as to why this might be the case.”