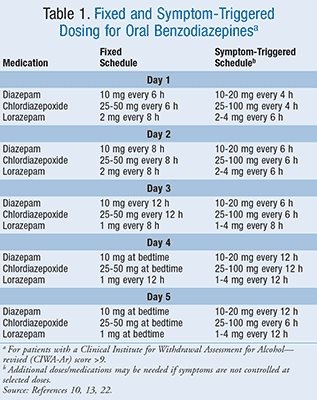 ABSTRACT: Alcohol withdrawal syndrome (AWS) can occur when an individual stops or even significantly reduces alcoholic consumption after a prolonged period of use. Mild symptoms can occur within hours after the last drink and, if left untreated, may progress to more severe, life-threatening symptoms. Depending upon the severity of withdrawal symptoms, patients may be treated in the inpatient or outpatient setting. Pharmacotherapy is often necessary for treating patients with AWS to manage the symptoms of withdrawal, prevent the progression to serious complications, and bridge these patients to treatment for maintaining long-term recovery. Although a variety of drugs have some utility in treating this disorder, the benzodiazepines remain the agents of choice.

The Diagnostic and Statistical Manual of Mental Disorders, Fifth Edition (DSM-5) combines alcohol abuse and alcohol dependence into the newly termed alcohol use disorder (AUD).1 According to the National Institute on Alcohol Abuse and Alcoholism (NIAAA), alcohol use disorders are medical conditions that occur in patients experiencing distress or harm related to their consumption of alcoholic beverages. Approximately one-half of patients with alcohol dependence will develop clinically relevant symptoms of withdrawal. More severe consequences of alcohol withdrawal, especially seizures or delirium tremens (DTs), occur in <5% of patients dependent upon alcohol.2

The 2012 National Survey on Drug Use and Health reported that 7.2% of adults (17 million people aged ³18 years) had an AUD.3,4 Within this group, 24.6% reported that they had engaged in binge drinking in the past month, while 7.1% reported heavy drinking during this time.5 Binge drinking is defined as “a pattern of drinking that brings blood alcohol concentration levels to 0.08 g/dL”; i.e., usually 5 drinks for men and 4 drinks for women within 2 hours.6 Heavy drinking is defined as “drinking 5 or more drinks on the same occasion on each of 5 or more days in the past 30 days.”6 Perhaps more significantly, almost 900,000 adolescents (aged 12-17 years) had an AUD.7

The U.S. Preventive Services Task Force (USPSTF) recommends screening all adult patients for alcohol misuse.8 Three primary tools should be considered: the Alcohol Use Disorders Identification Test (AUDIT), the abbreviated AUDIT-Consumption (AUDIT-C), and single-question screening. For example, the NIAAA suggests asking patients, “How many times in the past year have you had 5 (for men) or 4 (for women and all adults older than 65 years) or more drinks in a day?”8 Another commonly used screening tool is the Cut-Down, Annoyed, Guilty, and Eye-Opener (CAGE) question-naire.9 All of these are validated tests that clinicians may use in the outpatient setting to assess patients for alcohol misuse.

Screening patients for alcohol misuse can be eye-opening and beneficial for some patients in changing their drinking habits before any complications such as alcohol withdrawal syndrome (AWS) arise. Assessing patients in this way allows clinicians to provide counseling to those who engage in risky drinking patterns.

Individuals who have been drinking heavily for a prolonged period of time and significantly reduce their alcohol consumption or stop abruptly can develop AWS.10 This syndrome may be diagnosed if a patient experiences any two of the following symptoms after the reduction or discontinuation of alcohol use: autonomic hyperactivity (e.g., sweating or heart rate >100 bpm); increased hand tremor; insomnia; nausea or vomiting; transient visual, tactile, or auditory hallucinations or illusions; psychomotor agitation; anxiety; or tonic-clonic seizures.1,11

AWS consists of three or four (depending on the source) stages of severity, which are based on the symptoms a patient is experiencing.10,12 Stages 1 and 2 of withdrawal are characterized by milder symptoms, which may cause a patient not yet in treatment to begin consuming alcohol again.5 Stage 3 is characterized by similar symptoms with an increase in severity and the addition of seizures.13 Stage 4 includes the previous symptoms in conjunction with DTs. The primary symptoms of DTs consist of diaphoresis, fever, nightmares, agitation, global confusion, disorientation, visual and auditory hallucinations, and cardiovascular and metabolic complications.10,13 The mortality rate for patients who experience DTs has been reported to be from 1% to 15%.12,14

Two neurotransmitters in the brain are affected by chronic alcohol consumption and play a major role in AWS. Gamma-aminobutyric acid (GABA) is the primary inhibitory neurotransmitter and glutamate is the primary excitatory neurotransmitter. Together these neurotransmitters maintain neurochemical balance in the brain. The presence of alcohol inhibits the function of the N-methyl-d-aspartate (NMDA) receptor, leading to the sedative and anxiolytic effects of alcohol as well as to impaired memory and the generation of potentially life-threatening seizures.13,15 During withdrawal, GABA levels decrease below normal capacity, which ultimately leads to hyperactivity of the nervous system. At the same time, glutamate is activated, which in turn increases the function of the NMDA receptors.12,13

A process known as kindling has been proposed to explain the decrease in time of onset and increase in severity of symptoms in patients who have undergone repeated episodes of withdrawal. This is related to the frequent changes in GABA and NMDA receptors as described above.11,12

Patients experiencing AWS can be treated in inpatient or outpatient settings depending on the severity of the withdrawal. For patients with mild or moderate AWS, an outpatient setting compared to inpatient can be relatively safe and effective, have lower costs, and be acceptable due to the reduced impact on the patient’s personal life.10,17 Contraindications to outpatient treatment include abnormal laboratory results, absence of a support network, acute illness, high risk of DTs, history of withdrawal seizures, poorly controlled chronic medical conditions, serious psychiatric conditions including suicidal ideation, severe alcohol withdrawal symptoms, or abuse of other substances.17-19

The goals for treating AWS are to manage the signs and symptoms of alcohol withdrawal, prevent the progression to serious medical complications, and bridge patients to treatment for maintaining long-term recovery.10 Patients with very mild symptoms may only need supportive care, while patients with moderate-to-severe symptoms may warrant pharmacologic intervention.19

Due to the likelihood of nutritional deficiencies in patients with AWS, nutritional support, as tolerated, should be provided. As part of that support, thiamine and folic acid should be routinely administered. Folic acid supplementation of 1 mg daily is recommended. Thiamine supplementation prevents the development of Wernicke’s encephalopathy, and a dosage of 100 mg daily should be administered to all patients.10 In cases where Wernicke’s encephalopathy is suspected, high potency vitamins with 500 mg of thiamine are recommended to be given IV three times daily for 3 days.20

Benzodiazepines: Benzodiazepines are preferred and are considered first-line treatment in patients with AWS.15,17 These agents reduce the symptoms of withdrawal including seizures and help to prevent symptom progression.10,15 Long- and intermediate-acting benzodiazepines are used to treat AWS. The long-acting agents include chlordiazepoxide (14- to 100-h half-life of active metabolites) and diazepam (30-100 h). The intermediate-acting agents are lorazepam (12-h half-life), oxazepam (5-15 h), and alprazolam (6-26 h).21 There is no strong evidence that any one medication is superior in treating AWS. However, it is believed that long-acting benzodiazepines may provide for a smoother withdrawal effect than the intermediate.10,17 In patients with reduced hepatic function, including the elderly, intermediate-acting agents may be safer because they do not have active metabolites. In addition, these agents have a reduced potential for sedation and respiratory depression.13,19 Dosages should be individualized to control patient symptoms and, in the case of resistant alcohol withdrawal, very large doses may be necessary, although respiratory depression may be a complication.13

There are two separate regimens widely used for administering benzodiazepines for AWS, a fixed-dose schedule and a symptom-triggered dosing schedule (TABLE 1).10,13,22 The fixed-dose schedule utilizes specific doses at regular intervals, although it allows for additional doses to be given as needed to further control symptoms.22 The symptom-triggered regimen utilizes benzodiazepines to be administered only when the patient has significant symptoms represented by a CIWA-Ar score >9. Studies have shown the symptom-triggered regimen can reduce medication use and shorten the duration of treatment.23,24

In a study by Daeppen et al comparing symptom-triggered dosing to fixed-schedule dosing using oxazepam to treat alcohol withdrawal, the mean duration of therapy and total dose of oxazepam was 20 hours versus 62.7 hours and 37.5 mg versus 231.4 mg, respectively, with no difference in patient comfort.23 This study looked at inpatient treatment only.

Other Drug Treatments: Neuroleptic agents such as the phenothiazines and haloperidol may reduce the severity of some withdrawal effects and may be beneficial in patients with uncontrolled agitation, although there is little in the way of controlled clinical data to support their use. In addition, they are not as effective as benzodiazepines in blocking delirium and seizures.19

There are some data to suggest that anticonvulsants such as carbamazepine, oxcarbazepine, and divalproex may be useful in the treatment of alcohol dependence by reducing alcohol craving and in treating AWS through its antikindling effect.25-27 Ironically, these agents did not prevent DTs or seizures.10 In one study, gabapentin was shown to be effective in treating AWS compared to lorazepam. In addition, it appeared to reduce the craving for alcohol post withdrawal.28 As with the other anticonvulsants, more controlled trials are needed.

Barbiturates and propofol have been touted as effective in patients with refractory DTs.29,30 While barbiturates are very inexpensive, few controlled studies have been conducted.In addition, they increase the risk of respiratory depression when combined with alcohol.19 Little data are available on the use of propofol. However, a major disadvantage to its use is its high cost.30 Baclofen, a structural analogue of GABA used as a skeletal muscle relaxant, was evaluated as a treatment for AWS. The authors reported that baclofen was as effective as diazepam in treating AWS and shows promise as a treatment option.31

Adjunctive Therapy: Adjunctive therapy may need to be added to benzodiazepine therapy depending on the patient’s presentation. Beta-blockers and the alpha-adrenergic agonist clonidine may be added to reduce adrenergic symptoms such as by lowering blood pressure and heart rate and reducing tremors. However, they do not prevent seizures or delirium.32 Treatment options may include any of the other agents discussed previously. The selection of which agent to use is based on the specific signs and symptoms that are being targeted. It is important to note that these additional agents should not be recommended as monotherapy when treating AWS.10

The severity of the patient’s symptoms guides the frequency of monitoring. Those treated as inpatients may be initially monitored and assessed multiple times a day until symptoms improve. Once stabilized, the patient may be evaluated daily until symptoms resolve and the medication dosage is reduced. Upon completion of treatment, patients may need to be referred to a long-term outpatient treatment program, to an addiction specialist, or to an inpatient treatment program.5

It is important for pharmacists to understand AUDs as well as the signs, symptoms, and treatment of AWS. Since almost one in 10 people will suffer from addiction to some substance in the course of their lifetime, pharmacists may encounter such individuals on a daily basis. Once such an encounter occurs, pharmacists have the opportunity to counsel these individuals on the disease and make a referral for treatment. In the case of outpatient treatment of AWS, pharmacists can provide counseling to the patient and/or caregiver on the proper use and side effects of the drugs prescribed to treat either AWS or the AUD itself, and can be available if and when questions arise.

Because of the severity and complications that can arise from AWS, it is important to be familiar with proper treatment. The use of benzodiazepines is beneficial in lessening agitation, preventing withdrawal seizures, and reducing the progression of withdrawal symptoms. Pharmacists should be well educated on AUDs and their treatment and on the treatment of AWS to facilitate and optimize timely and appropriate patient care, which could ultimately lead to saving a patient’s life.