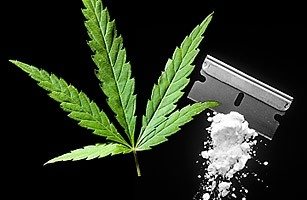 Early-onset is related to worse cocaine withdrawal during detoxification.

Cannabis use should be considered an adverse factor to cocaine withdrawal.

Long-term and early-onset cannabis consumption are implicated in subsequent substance-related problems. The aim of this follow-up study was to investigate whether these patterns of cannabis use could impact cocaine withdrawal severity and cocaine craving intensity during detoxification. In addition, we investigated their impact in the rehospitalization rates due to cocaine dependence after 2.5 years of detoxification assessment.

The sample was composed of 93 female cocaine-dependent inpatients who enrolled in an inpatient detoxification unit. Cocaine withdrawal symptoms were measured at the 4th, 9th and 14th days of detoxification using the Cocaine Selective Severity Assessment (CSSA). Data on the age in the first year of drug use–alcohol, cannabis and cocaine–and the years of substance abuse were obtained using the Addiction Severity Index (ASI-6). Other relevant clinical variables were also investigated, including a 2.5 years follow-up assessment of rehospitalization rates due to cocaine dependence.

Note to users: Accepted manuscripts are Articles in Press that have been peer reviewed and accepted for publication by the Editorial Board of this publication. They have not yet been copy edited and/or formatted in the publication house style, and may not yet have the full ScienceDirect functionality, e.g., supplementary files may still need to be added, links to references may not resolve yet etc. The text could still change before final publication.

Although accepted manuscripts do not have all bibliographic details available yet, they can already be cited using the year of online publication and the DOI, as follows: author(s), article title, Publication (year), DOI. Please consult the journal’s reference style for the exact appearance of these elements, abbreviation of journal names and use of punctuation.